In the period after the second world war, Volkswagen became known as the German brand whose vehicles are affordable for everyone. Based in Wolfsburg in Lower Saxony, Volkswagen AG is still Europe’s largest automobile manufacturer today. Just like the post-war years when the ‘Miracle on the Rhine’ led to both economic and moral upswing, the brand stands for feelings of optimism and reliability. Meanwhile, VW Merchandise intensifies these emotions and seduces retro lovers with memories of the good old days.

VW is inseparably linked with the city of Wolfsburg, where one of the largest car production facilities in the world was built with British support after the war. As early as in 1955, Wolfsburg celebrated manufacturing one million Volkswagen cars, two years after a workshop was opened on the other side of the Atlantic in Brazil. Today there exist more than 100 production facilities around the world. 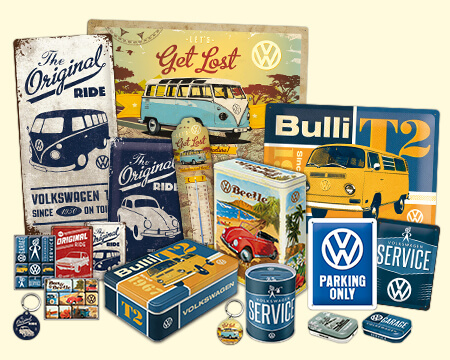 A brand in rich tradition

Volkswagen classic is a buzzword for lovers of classic cars. The bi-annual fan magazine VW Classic is where nostalgics get their money’s worth. But even laymen know old VW models such as the Golf, and classics such as the Beetle or the minibus ‘Bulli’ have become iconic. The history of the Beetle is elementary for the Volkswagen Group, as the company’s foundation in 1937 was explicitly based on developing this affordable car for broad sections of the population. In 1972, Volkswagen completed manufacturing about 15 million Beetles and succeeded in surpassing the then production record held by the American brand Ford.

Volkswagen’s advertising has always been able to secure a place in the hearts of its fans by using humour. In the 1950s an advertisement campaign nicknamed the Volkswagen Limousine “snowplough”, emphasising how the car could safely drive through snow and ice even in the deepest winter. A few years later, a commercial mocked James Bond to highlight the advantages of the reliable Beetle. And in order to showcase the Bulli’s spaciousness, commercial artists unceremoniously put an elephant into the bus. VW’s advertising has always been just as friendly and down-to-earth as the brand itself.

A home on wheels

For no car is the term ‘cult’ more suitable than for VW’s minibus, which is affectionately called “Bulli” in colloquial language. It is certainly one of the best examples of a successful combination of great planning and targeted advertising. The VW Bulli, first produced in series in 1950, is characterised by its timeless classic design. For the last 70 years it has been symbolising big emotions: freedom, vitality and the spirit of adventure. VW created the minivan category essentially from scratch, landing a huge hit in the international car history.

The practical minibus is so much more than just a means of transport― it is an approach to life. Around the world, the Bulli is known as the embodiment of the proverb “The journey is its own reward”. Entire fan communities have formed, convening regularly for “Bulli meetings” to revel in nostalgic memories. 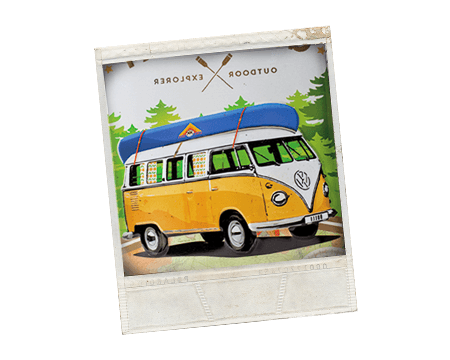 While the Bulli can be used in many ways, it is most famous as a moving holiday home. Its most popular form is the Camper edition with a pop-up roof that seems to invite you to spend nights under the stars or take a break on the beach with the sound of the sea in your ears. VW’s slogan “Let’s Camp Away” captures this desire for freedom and the feeling of wanderlust that probably everyone has at some point in their lives, reflecting the dreams that entire generations were able to fulfil with the help of the minivan.
Volkswagen California, the newer generation of the camper that was manufactured in 1989, keeps these dreams alive. The camper is a home on wheels that has reliably accompanied globetrotters and families around the world. Nostalgic-Art offers a wide range of beautiful Bulli and VW California fan articles.

Where can you buy the VW merchandise?

The Nostalgic-Art VW collection perfectly captures the spirit of adventure and nostalgia embodied by this traditional brand. As a business-to-business company, it is our goal to spread the nostalgic charm of vintage products around the globe. Our VW products are the perfect gift for fans and collectors, retro lovers and travel enthusiasts. If you would like to buy our products for private use, you can do so conveniently through our distributors. Enjoy browsing through our collection! 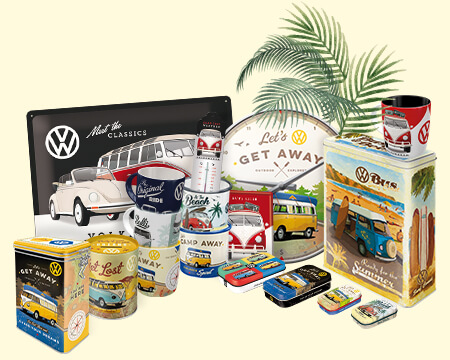