The breathtaking beauty of nature stretching to the distant horizon. The hum of the engine in your ears and the wind on your face. Unlimited freedom. That’s what the traditional American brand Harley-Davidson has meant to its customers for more than 100 years. Immortalised by the 1969 film Easy Rider in which the leather-clad pair of Peter Fonda and Dennis Hopper cross the USA on their motorbikes, the brand keeps the American dream alive to this day. The characters’ bikes, “Captain America” with the design of the American flag and the fiery “Billy Bike” decorated with flames, have turned into cult models.

What better gift for motorbike lovers can there be than the nostalgic fan articles from our Harley-Davidson Shop? From high-quality tin plates decorated with the brand emblem, cups and key chains to Harley-Davidson watches, you will find everything that a biker’s heart desires. Just looking at the collection of our Harley-Davidson gifts will bring Route 66 to life in your mind. 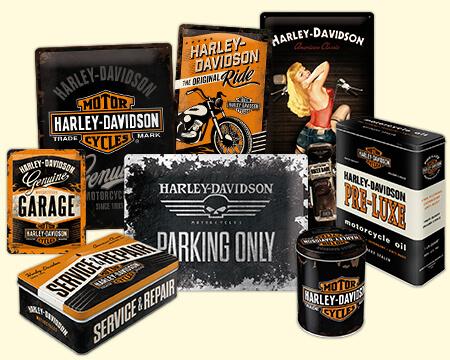 Harley-Davidson conquers the world of biking

In 1901, William S. Harley and Arthur Davidson designed their first motorbike. Six years later, they founded the “Harley-Davidson Motor Company” in Milwaukee, the headquarters of the company which to this day produces exclusively in the USA for the domestic market. Through the film Easy Rider, the brand’s so-called chopper models became famous. “Chopper” was originally the colloquial term for bikes that were heavily modified and individualized by their owners. After Easy Rider’s rise to fame, however, motorbikes with a long flat front fork are generally referred to as choppers. This ultimately prompted Harley-Davidson to design flexible models that can be customized by bikers themselves ― for which fans love the brand even more. 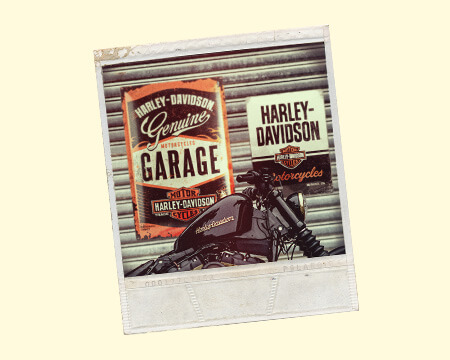 Harley-Davidson’s model range has six different series with different engines. Some of the models deserve special mention, most notably the “Fat Boy”, legendary member of the Softail Slim series. Fat Boy caused quite a stir when it was introduced in 1990, partly because of its unusual name, which was chosen deliberately because it sounds like a nickname that bikers would actually use. Fat Boy combines a massive design with the power of the famous Milwaukee Eight engine. Following the bike’s 30th anniversary in 2020, Harley-Davidson introduced a limited re-edition with only 2,500 individual bikes, all with a numbered plaque on the console. Some of these special motorbikes are also available at Harley-Davidson Germany.

Another legend is the Sportster model, which is slim, handy and suitable for both beginners and experienced bikers. With its dynamic look, the Sportster stood and still stands for youthful awakening and was able to easily take on the British competitors in the professional biking scene. In 2004, a completely revised generation of the Sportster series was introduced, featuring a stronger V2 engine and a new frame.

Where can you buy this merchandise items?

Are you looking for some road movie nostalgia or would you like to gift the American way of life to a friend or a loved one? Nostalgic-Art’s merchandise articles are the perfect solution. Made in Germany, they are characterized by a very high quality and a lot of attention to detail. We are a business-to-business company with the aim of spreading the nostalgic charm of vintage products around the globe. If you would like to buy our Harley-Davidson merchandising items for private use, you can do so conveniently through our distributors. Enjoy browsing through our collection!

Get our products Back to overview
We use cookies to ensure that we give you the best experience on our website. If you continue to use this site we will assume that you are happy with it.OkNo