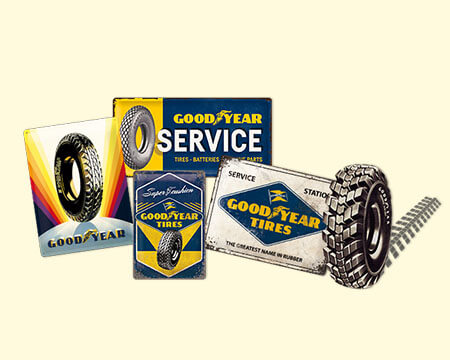 The history of Ford

In our collective mind there is barely any company so closely linked to the history of the automobile as Ford. Henry Ford, first chief engineer and soon-to-be president of the legendary firm was one of the twelve investors who founded the Ford Motor Company in Detroit on June 16, 1903. From the very beginning onwards, Henry Ford’s dream was to build a robust and well-designed car that ordinary people can afford. In the following five years, he designed a number of models that were named after the letters of the alphabet. It took half a decade, but on October 01, 1908, Henry Ford’s dream became reality: The Ford Model T was released.

More than 10,000 vehicles were produced in the first year alone, a huge record at the time. Ford rapidly rose to the top of the American automobile industry and by 1913, the company produced half of all cars sold in the USA. Shortly afterwards, Henry Ford came up with another brilliant idea, namely assembly line production, which reduced costs and ― thanks to Ford’s insistence on a minimum daily wage of $5, more than twice of what had been paid before ― also made the workers happy. It was Henry Ford’s stated goal that his own employees should be able to afford a car from his company, an admirable philosophy for which he is still remembered today.

In the decades to come, Ford produced more than 15 million instances of the T model. Many other models will never be forgotten, such as the sporty Ford Thunderbird, which brings the 50s and 60s nostalgia back to mind, or the famous Ford Bronco. The company grew into a huge industrial complex, which also quickly positioned itself on the international floor. In 1925, Ford cars become eligible for export to Germany, and the subsidiary Ford Deutschland with headquarters in Cologne was established shortly afterwards. 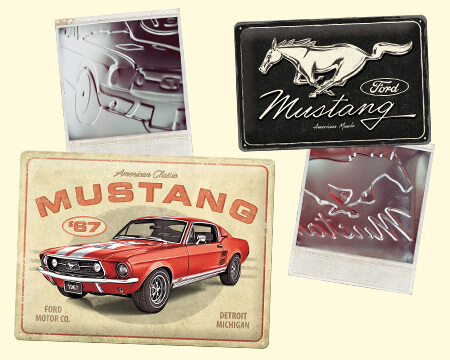 Ford is a traditional brand that has produced many extraordinary models. The Ford Capri, an everyday sports car, has secured a special place in the hearts of its fans. Within five decades, the model has matured from a “sporty everyday sedan” to a coveted classic without losing any of its gracefulness in the process. The car has German roots, as it was first presented to the German trade press in Bonn in 1969.

The Shelby Cobra, on the other hand, is a racing car for true professionals. Based on the English sports car AC Ace, the vehicle was designed in 1962 by the legendary American racing driver and car designer Carroll Shelby. The Shelby Cobra 260, the first in Shelby’s history, was auctioned in 2012 at a record price of 12.7 million euros, making it one of the most valuable Fords ever. The Shelby 500 GT, introduced in autumn 2019, is the latest model in the series and also the most powerful car in the company’s entire history.

Finally, one of the most famous models: The Ford Mustang. The cult car has appeared in over 500 movies and TV series, helping James Bond chase opponents and replacing the Thunderbird as the company’s most important sports sedan. Initially produced in 1964, the Ford Mustang has never fallen out of fashion: In August 2018, the ten millionth Mustang rolled off the assembly line.

From the Ford Mustang classic car to the Shelby Cobra, from the Capri to the Ford Pickup―the American brand’s traditional models have conquered car lovers’ hearts by storm. The Ford merchandise items in our collection are the perfect gifts for fans of the brand. Our high-quality tin plates, mugs, and many other products immortalize Ford’s classic cars and the entire adventurous history of the automobile industry, creating a nostalgic and pleasant atmosphere whenever they are picked up. 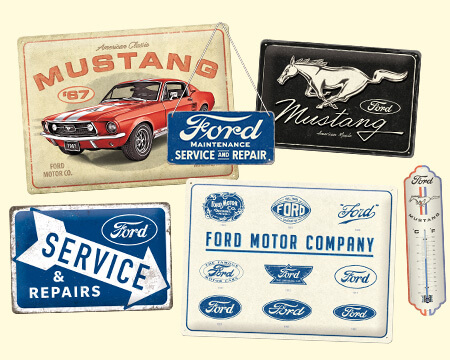 Where can you buy the promotional items?

Are you interested in our Ford collection? The merchandise articles of Nostalgic-Art are made in Germany and are therefore characterized by highest quality and a special attention to detail. As a business-to-business company, it is our goal to spread the nostalgic charm of vintage products around the globe. If you would like to buy our products for private use, you can do so conveniently through our distributors. Enjoy browsing through our collection!

Back to overview Our products
We use cookies to ensure that we give you the best experience on our website. If you continue to use this site we will assume that you are happy with it.OkNo