About the history of Coca-Cola

Being one of the world’s most successful brands, Coca-Cola has made history as a marketing and merchandising champion. In 1886, the pharmacist John Pemberton created the recipe for Coca-Cola by chance, completely unaware that he had just invented what was going to become the world’s most famous soft drink. With the original recipe―which is kept top secret in a safe in Atlanta to this day―Pemberton laid the foundation for a story of unparalleled success.

The brand’s rise in Germany began in 1929, when the first Cola was bottled in the city of Essen. Thanks to a semi-automatic filling machine, up to 35 crates per hour could soon be filled and shipped out nationwide. At that time, 43 million people around the world were already enjoying the increasingly well-known brand, and from the 1950s onwards it rapidly gained popularity in Germany.

Coca-Cola’s advertisement has always been both timely and timeless, making it one of the favourite brands of German vintage lovers. Throughout its rich history, the brand has been a symbol for the exceptional moments of everyday life, as well as an international sign for vintage charm and optimism. Coca-Cola is much more than just a beverage—the fizzy drink in the iconic slim glass bottle never fails to convey a feeling of vitality, and along with it an aura of nostalgia. 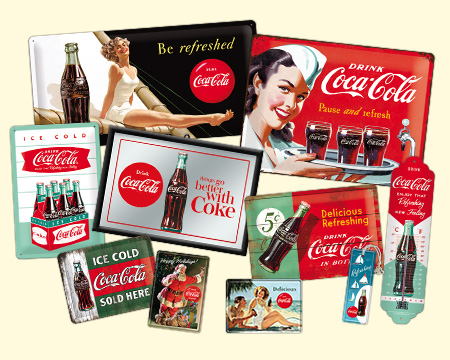 Coca-Cola has always been a design pioneer. The unmistakable red-and-white logo with the dynamic lettering has barely changed in over a hundred years. The elegant curvy bottle, in which Coca-Cola has been presenting its products since 1916, is another ingenious advertising idea. On top of that, everyone remembers the charming designs of the brand’s ads from the 1930s to 1960s and associates them with their own particular memories. While shaping entire generations, Coca-Cola’s advertisements have always focused on emphasizing the sense of community between people of different origins and different ages.

Many of the brand’s marketing ideas are unforgettable, from the curvy Coca-Cola refrigerator with matching magnets to the nostalgic Christmas trucks that herald the annual Advent season in many cities across the world. The trucks appeared for the first time in a 1995 advertising campaign created by the American company “Light and Magic”, which is also responsible for the Star Wars films―and indeed, there is a special kind of magic attached to the colourful lights of the trucks on a snowy winter evening. Originally created for screen use only, real Coca-Cola trucks drove through the USA for the first time in 2001. On the annual Christmas tour, one person must not be missed: Santa Claus, who owes his modern appearance mainly to the soft drink brand. The cheerful old man, whose white beard and red cheeks everyone remembers from their childhood, originated from a Coca-Cola advertising campaign in the 1930s. This was one of the brand’s greatest marketing successes, since until today Santa Claus is typically depicted wearing a coat in the red-and-white Coca-Cola colours. 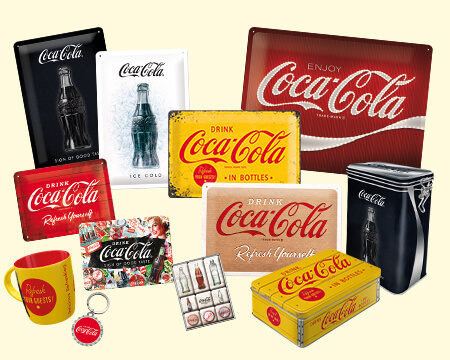 Just as the beverage Coca-Cola is a design-classic, the brand’s merchandising and marketing department is constantly creating new classics. Slogans like “Drink Coca-Cola” or “Taste the feeling” have shaped the sentiment of entire generations and combine the refreshing taste of the drink with optimism and the typical American feeling of freedom. And yet the advertising never fails to be topical: In 1989, when the fall of the Berlin Wall made international headlines and Germany was preparing for its reunification, the advertising slogan “You can’t beat the feeling” perfectly reflected the society’s spirit of optimism.

By representing all these memories, Nostalgic-Art’s Coca-Cola merchandising products are timeless classics that will enchant vintage lovers of all ages. Our wide range of vintage and retro products have been capturing the nostalgic charm of the brand since 1995. We design and manufacture a wide range of products with great attention to detail, all made in Germany and therefore of extremely high quality and durability. 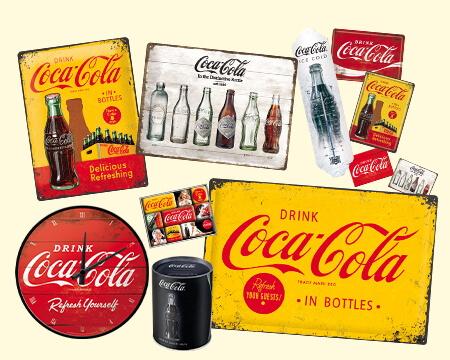 Where can you buy Coca-Cola promotional items?

You can find the beautiful motifs of the timeless Coca-Cola merchandising products in our Nostalgic Art collection. Vintage lovers will immediately feel at home in our shop, since our unique designs of gifts and decoration items are meant to arouse emotions and spread joy. We are a business-to-business company and see it as our mission to spread the nostalgic charm of vintage products internationally. If you would like to buy our products for private use, you can do so conveniently through our distributors. Have fun browsing through our collections!

Back to overview Get our products
We use cookies to ensure that we give you the best experience on our website. If you continue to use this site we will assume that you are happy with it.OkNo