The history of BMW

BMW is one of Germany’s most popular brands. It has become a symbol for quality, efficiency, and sportsmanship. Starting off by manufacturing aircraft engines, the company has been producing motorcycles since 1923 and thus has a longer tradition in bike construction than in the automotive sector, which was added only in 1927. Since the 1960s, BMW has made a name for itself as a manufacturer of comfortable and high-priced vehicles. One of its most famous old models is the BMW 501/502, also called “Baroque Angel”, which was built between 1952 and 1964 and received its nickname thanks to its elegant curvy design. To this day, however, BMW is most famous for being the forefather of the six-cylinder engines that were first introduced with the BMW 303 in 1933. But the brand’s sports cars also have a lot to show for themselves: between 1936 and 1940, for example, the BMW 328 competed in 172 national and international races – out of which it won 141. 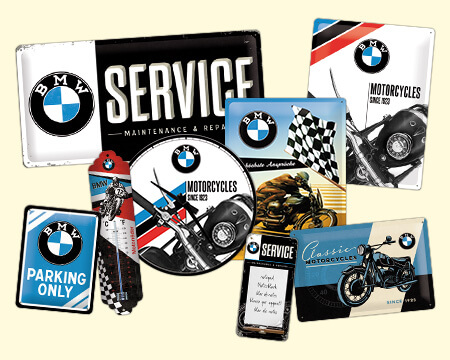 One vehicle of particular interest to vintage fans is the BMW Isetta, a so-called “Motocoupé” or hybrid of a motorcycle and a car. The Isetta was built between 1955 and 1962 and quickly became a symbol of Germany’s economic miracle and the rapid reconstruction in the post-war period. As cars were unaffordable for many immediately after the war, the cheaper Isetta filled a demand gap and was even used by the Cologne police for a while.

BMW’s origins in aviation and its ties to its home base in Bavaria are also reflected by its blue-and-white propeller logo. Though it stopped manufacturing airplane engines long ago, the company still produces motorcycles, for example as part of the popular BMW Heritage collection. BMW is the only high-volume manufacturer of large-capacity motorcycles in Germany and one of the top-selling manufacturers in Europe.

The electrification of BMW

Did you know that a fully electric BMW 1602e was used at the 1972 Summer Olympics in Munich to film and supply water to the athletes in long-distance races? Due to its quiet engine, this car was the best choice. Over the past decade, part of BMW has successfully specialised in the development of electric cars, of which the brand had already sold more than half a million by 2019. The Bavarian company’s i-series consists of completely electric as well as hybrid vehicles, which have made it to the top of the world market within a short time. BMW now has the world’s broadest selection of premium electric cars. They currently account for about 13 per cent of new registrations, and this figure is set to rise to 50 per cent by 2030.
Particularly noteworthy among BMW’s electric cars is of course the i8, the most successful sports car in the brand’s history. The i8 was launched in 2014 and became world famous for its futuristic design and its innovative technology. Successfully combining sustainability with the sheer joy of driving, it was the BMW Group’s first plug-in hybrid model. Available in two versions, Roadster and Coupé, the i8 combines a passenger cell made of carbon-fibre reinforced plastic with an aluminium chassis. Both models were produced at the BMW plant in Leipzig until the summer of 2020, when production ended after about 20,000 vehicles. 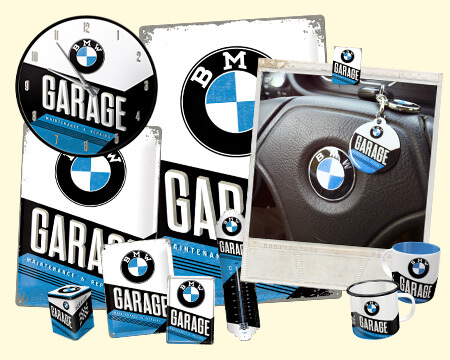 Retro merchandise and gifts from BMW

All over the world, the BMW brand is associated with traditional quality made in Germany ―just as our Nostalgic-Art collection of BMW gift articles, which are manufactured with great attention to detail, is also made in Germany. Admirers of the traditional brand will find the most beautiful BMW merchandise in our shop. Whether you are a die-hard fan of BMW, a collector of vintage cars or a lover of modern vehicles – we have something for everyone.
In our shop you will find BMW clocks, which give the walls a blue-and-white charm, and high-quality tin plates in vintage style, which are available in different designs, for example decorated with motorcycles from the Heritage Collection. We also offer cups, key rings, coin banks or thermometers in the classic BMW design. 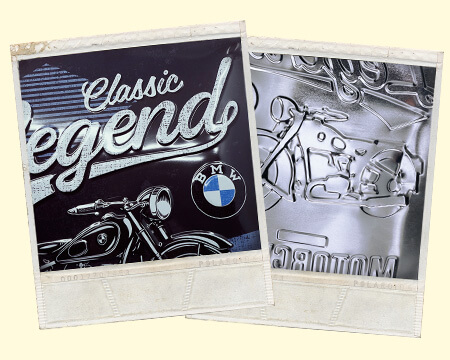 Where can you buy the promotional items?

The traditional Bavarian brand has many fans, and we have set ourselves the goal of adequately representing its style through our products. Are you interested in our BMW merchandise and would you like to have a look around our shop? We are a business-to-business company with the aim of spreading the nostalgic charm of vintage products around the globe. If you would like to buy our BMW merchandising items for private use, you can do so conveniently through our distributors. Enjoy browsing through our collection! 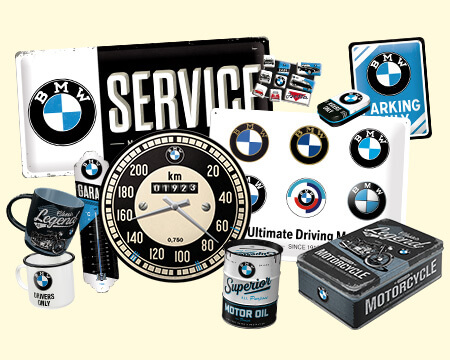